Fabla is an open-source LV2 drum sampler plugin instrument. It is ideal for loading up your favorite sampled sounds and bashing away on a MIDI controller. Or if it’s crafty beat programming your after that’s cool too! The ADSR envelope allows the shaping of hi-hats and kicks while the compressor beefs up the sound for thumping kicks! 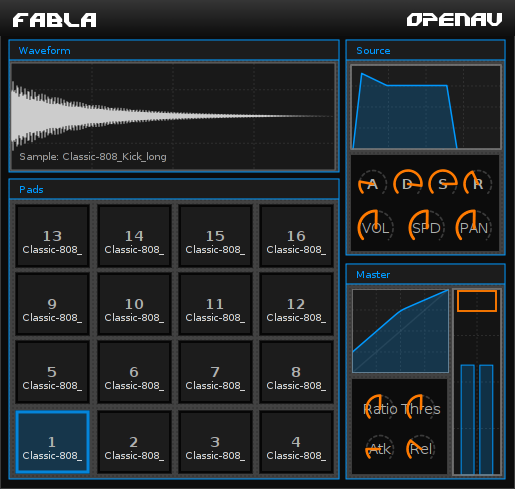 Four-to-the-floor with some Ambient Guitar:

The acoustic drum sample pack “Savage Drums” is now included with Fabla! The sample pack was recorded at “The Music Hub” studio, in Limerick, Ireland with drummer is Stephen Savage. Also included is HardElectro, Classic-808 and EasternHop, based on samples from Hydrogen drumkits.

OpenAV software is open source, and you can change and improve it! Checkout the OpenAV Github Page for details!